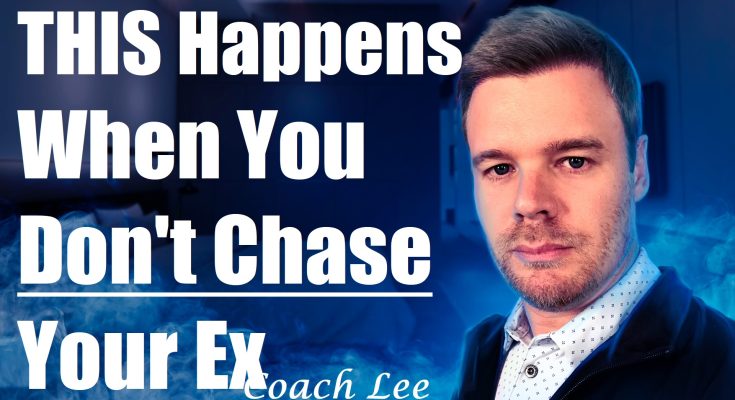 Be sure to watch the video above all the way through.

I’m going to talk to you about what happens when you stop chasing your ex.

The first thing that happens when you stop chasing is this – they stop running.

And you know if you’ve seen a lot of my other videos that I do talk about this quite a bit BUT I’m going to get into some things that are different about what happens when you stop chasing your ex.

Your ex will stop running further away and the simple reason is because there’s no need to get further away from you because you are not trying to pull them back.

The damage that can be done when you refuse to accept the breakup is that they can’t be around you because of the drama and/or pain that they have to see you going through.

So all of those things will make them take themselves further away from you. They will think of you.

And that will make them feel further away from you as though the breakup is becoming a much more significant separation than it would be otherwise.

Now, a breakup is a separation, but when you don’t push them further away, that canyon or that gulf between the two of you is smaller and that’s good.

That gives you better odds than if they feel like they can’t be around you.

And they can’t even get to that point where they can think about you positively, because they’re having such negative experiences whenever they’re around you.

So if you don’t chase them, they don’t feel the need to go further away. Now the capacity is there, but as long as you don’t chase, you’re not making it happen. And so the closer they are to you, the less ground that they have to cover to actually be in a place where they reconsider the breakup, which is really what you want!

If you want to get your ex back, before I get to the second thing that happens when you stop chasing your ex, take a quick second and subscribe to my YouTube channel (link opens in new window so you won’t lose your place here)!

The second thing that happens when you stop chasing your ex

The second thing that happens is that they become curious. And I talk about this in my video Stages Your Ex Goes Through During No Contact, but I’m going to mention some other things about it here that I don’t mention there.

So the first thing when your ex becomes curious – it changes their direction of focus from away from you back at you.

And so if you’re wondering about, as many of you have stated in my comments on YouTube, that you’re afraid your ex will forget about you during no contact, well, if you want to give yourself the best chance of that not happening to where your ex does not forget about you, get them curious about you because that’s when their focus is actually on you much more than it would be if they were just trying to get away from you.

So curiosity is very important and it’s within that stage that you can actually create this preoccupation with you because one of the things about celebrities is that we want to know more about them because don’t know much about them.

You think you do because you see them on TV, you see them in magazines, but you really don’t know that much about their personal life and what’s going on with them. And so it creates this mystery and this magic and this preoccupation a lot of times.

And those details will begin to resurface with your ex simply because now you’ve created this entire new persona for yourself since you’re not chasing and they begin to see you differently. They don’t know what it’s like to experience you not chasing them.

They wonder if you’re not interested. And they begin to think of you in a different lens because the day they broke up with you, their attraction to you plummeted. It had already been suffering, but when they break up with you, that very act lowers you because they are the one who is telling you that they don’t want to be with you, which is rejection.

They were putting themselves in the position of being more attractive when they do that and their attraction to you falls even more.

But when they have to come face-to-face with this concept, now that they’re curious about you aren’t chasing, it’s almost a rejection of them.

So it begins to erode their feelings of superiority when it comes to attractiveness and it begins to raise yours up some, because now you’re the source of that curiosity.

And curiosity, as I’ve said – especially some of my older videos – is a precursor to attraction. When you become curious about someone you want to know what is it that makes them tick. What are they interested in? Who are they? That’s the path to feeling attraction for them.

And so you certainly want that.

So if you don’t chase, your ex can become curious. As a matter of fact, it happens more times than not.

Before I get to number three on what happens when you don’t chase, take a look at the link in the description below to get more information on my Emergency Breakup Kit. It’s a powerful guide to help you get your ex back!

So take a look.

When your ex’s attention stops being placed on how they can escape you and instead it turns to wondering about not just you, but in this case, did they make the right decision?

Because if you put doubt in your ex’s mind about the breakup, you raise your own attractiveness and you demonstrate to them that maybe they were wrong about you and you were more attractive than they thought.

Now, I’m not saying your ex is sitting there making a scale of 1 to 10 and deciding that you’re really a 6 when they thought you were an 8 and therefore they should break up with you.

That’s not how it works. It’s more of a gut feeling inside of them.

It’s not something they can define.

And so when they think that they are not attracted to you, they just don’t feel it anymore because it’s faded.

Maybe there’s been some bickering and fighting. Or they became bored, which is an immature thing to in a relationship, but it can happen to all of us.

And it’s where the two people in the relationship need to put some more work into it. I’ll talk about that in other videos. But when your ex feels their attraction for you go up, they’re beginning to feel some of that old attraction, at least the sparks of it.

Maybe it’s not enough to just jump back in with you yet, but at least enough to where they’re thinking about it and their psychological point of pressure changes to where now they wonder if they’re sure they made the right decision.

Suddenly now it’s more important to them because maybe what they lost is actually higher value than they thought before.

So it’s crucial that you don’t chase and that you allow them to reconsider their position on all of this. And that’s when the pressure really begins to grow because they don’t know what’s going on with you. And the possibility is there that they could want you back, that they could think this was a mistake, and that they want to be back together with you.

But they also could worry that you don’t want to get back together with them. That maybe you’re too far gone.

Maybe you’ve moved on or you’re with someone else. They could actually realize that they could have tremendously hurt themselves and their future. And so they actually begin to move into that role of being the one who was dumped at least in terms of how it feels.

Number four on the list is they reassign your position.

So for example, like I mentioned, in the previous point, if you were a 6, now you’re an 8 again, or at least. So that movement is something that impacts them, but also they begin to reassign their own position in that if they thought that they were significantly more attractive than you just before the breakup or at the breakup, now they are reconsidering that.

And so they begin to feel that they are maybe a little bit less attractive. It can be quite the swing.

And so this all plays into how they look at you, how they feel about you, even though they are not thinking in terms of numbers and math and all that stuff.

I’m just trying to simplify it. Attraction is mostly a feeling and it’s difficult to put into words.

Take a quick second and subscribe to my YouTube channel (link opens in new window so you won’t lose your place here)!

The fifth thing that happens when you don’t chase your ex, is that your ex fears losing you.

It’s a culmination of all the things I’ve been talking about now.

They don’t have the control anymore.

Whereas before they had the control, they were making the decision and you were at their mercy, but now they fear they made the wrong decision. They are at your mercy.

So they have fear of loss, plain and simple, which is what has to be there in order for you to turn the table and get them back.

And so by not chasing, you can actually get to the point where your ex is now the one who’s moving toward you and trying to pull you back to them, whereas before it was the opposite and it can be a beautiful thing if you want your ex back.

I highly recommend my Emergency Breakup Kit to give you the best chance possible of getting your ex back since it guides you through possible situations and responses.

No matter what, I wish you the very best!