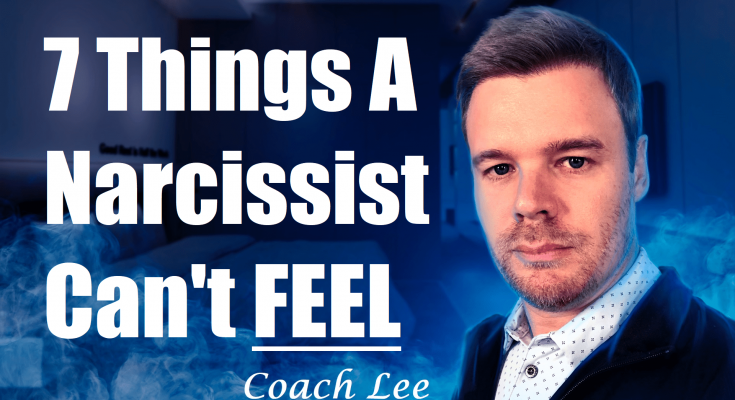 If they act like a narcissist, it’s not a consolation prize that they don’t have an official diagnosis.

With that in mind, here are some traits of someone who is narcissistic in terms of what he or she can’t feel that normal people would.

Does that mean that every single narcissist has never felt empathy?

No, but generally people who would be considered clinically to be narcissistic don’t feel such a thing.

That means if you are in pain, the narcissist will be quick to forget that you are.

So if 30 seconds has passed and you express continued pain from a headache, the narcissist will often seem to have forgotten that you are even in pain because it’s not an impacting factor to him or her.

Or if your neck hurts and you asked them to massage it a bit, they would likely try to get out of it or would do it for a very short period of time and say, “There you go.”

The concern would not be there for your pain.

And that is a fundamental that you would notice with a narcissist in that they look at pain as more of a curiosity, like an observer.

Whereas a normal person would almost feel that pain with you.

A narcissist on the other hand, sees your pain as more of an inconvenience.

They wish you’d shut up about it so that they can get on with the evening – which is for you to impress and spoil them in the first place in their mind.

It doesn’t matter if you helped found a business, start a club, or if you assisted a person with raising money for a cause.

A narcissist would feel no guilt or lose sleep over dropping you and pocketing the profits just because of convenience or pressure.

Or if someone else looks better in a suit or dress – the narcissist can walk away from you on a bad-hair day.

In politics it’s, “I’ll betray an ally or the people because a special interest group offered me more money.”

Someone who doesn’t have loyalty as one of their characteristics is not someone you want to be in a relationship with – narcissist or not.

Again, these are general principles.

Sometimes a narcissist might feel a twinge of guilt or remember feeling it a few years ago.

But in general, a narcissist does not feel guilt.

So they hurt your feelings?

You had to work late to clean up their mess?

They dropped your phone and cracked the screen?

A narcissist doesn’t lose sleep over such things.

No remorse or guilt will be felt.

If other people are in the way of a narcissist getting to where she/he wants to be, they are merely obstacles.

The same detachment exists if a narcissist hurts someone unnecessarily – it doesn’t impact them.

4. A narcissist does not feel humility.

There’s a difference between confidence and narcissism.

A confident person will know his or her weaknesses but still believes he can succeed, improve, find a way, etc.

A narcissist does not feel humility when they should feel guilty or in a more humble position when they have wronged someone.

Sometimes a narcissist will learn what society expects and they might pretend to do some of these things.

That’s where it’s tricky to identify someone who could actually be a narcissist.

They don’t always portray these things in obvious ways.

5. A narcissist does not feel connection.

You are there to plan great evenings to entertain and impress the narcissist.

You are there so the narcissist can show off to people that someone wants them.

You are there to make the narcissist feel wanted, lusted after, sexy, beautiful, handsome, and otherwise physically attractive so that the narcissist can just sit back and feel your worship over their body or brains.

But there is not a mutual connection where both of you feel that the other is wonderful.

You don’t have terrific conversations where the two of you imagine together.

A narcissist sees you as an accessory, entertainment, and as a source of compliments.

A narcissist does not feel a connection to you as a person.

6. A narcissist does not feel protective impulses toward you.

In other words, if someone is being bullied, a narcissist does not feel an innate urge to stick up for them, and to say ‘That’s not right.’

They figure the bullied person is just on their own – unless they can get a favor out of them by doing a favor first.

A narcissist likes debt owed them.

They see your job as revolving around them.

7. A narcissist does not have a sense of fairness (or justice)

If I buy you dinner, maybe sometime you buy me dinner.

I pick you up, maybe next time you pick me up.

I invite you to my home, sometime you invite me to your home.

Those are really basic things.

In relationships they are more complex.

I reach for your hand, maybe thirty minutes later you be the one to reach for my hand.

Everyone likes to have interest shown in them.

For a narcissist it’s all about them wanting you to constantly demonstrate how much you want them, but they don’t really feel the need to do that back for you.

That’s because a narcissist doesn’t see fairness. They don’t get it because they see your existence as being one to feed them.

Again, a narcissist will learn to behave in ways that are socially acceptable and so they might fake some of these things (a.k.a. love bombing where they do enough to reel you back in).

They usually pick up that people don’t like self-centered people but as far as doing it because it is within them, because they want to and believe they should – it’s not there.

Some of them might learn it mathematically like, this person did this so they expect me to do it for them at some point, but many of them just don’t get it.

Does It Matter If A Narcissist Has Been Diagnosed?

If someone demonstrates the behavior of a narcissist but hasn’t been clinically diagnosed, does it really matter?

If they treat you the way I’ve described or seem incapable of behaving with these traits and feelings, why would you want to be with her or him?

After all, ‘narcissist’ is just a word, a title, and a diagnosis, but if it quacks like a duck, for all intents and purposes, it’s a duck.

If they are treating you that way, I don’t suggest you continue with them.

Try to move on with your life. On the other side, you will be better off.