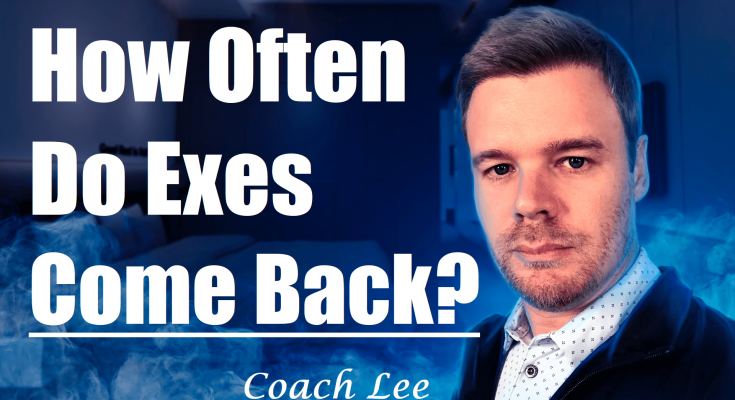 When people approach me as a relationship coach and ask for help in reuniting with their ex after a breakup, they almost always want to know what their odds are of getting their ex back.

They also want to know how often exes come back in general.

They want to know if the things that I talk about in my videos really work.

Before I get any further, I want to strongly encourage you to watch my video above all the way through.

The more that you know about this and the more that this information is reinforced within your mind and heart, the better your odds of getting your ex back after they broke up with you.

In some of my other videos, I mention that there is a 70% success rate of the No Contact Rule working to get an ex back and people, understandably, latch onto that.

In the video above as well as others, I explain that there are certain factors that contribute to how successful no contact can be.

The No Contact Rule can’t rewrite history to turn a bad relationship into a good one.

It also can’t fully overcome a terrible response to a breakup.

Before you panic, if you had a bad response to the breakup, just know that your response didn’t have to be perfect.

It just needed to be less than terrible and rectified in the right amount of time.

Basically, your response couldn’t be too bad and you needed to have gone into no contact soon enough.

Most people don’t respond well to being dumped, but the more you push, prod, beg, and refuse to accept the breakup, the more delayed the process of re-attracting your ex will be and the odds, unfortunately, do get worse of them coming back.

If the relationship was good and the breakup response was decent by no contact being implemented soon enough, the odds are about 70%.

So the best-case scenario of the No Contact Rule is a 70% success rate in getting an ex back.

The odds of an ex coming back go down from there based on varying levels of relationship quality and breakup response.

Factors that Impact An Ex Coming Back

For further reading on this, I recommend you open this link in a new tab to read after you are done here: What Makes An Ex Come Back?

1. The Length of the Relationship

A lot of people ask me what the odds are of a short term relationship in terms of no contact being able to re-attract the person who initiated the breakup.

The odds aren’t as good if the relationship was a short one.

I wish I had better news, but the fact is, the longer the relationship existed, it’s more likely that important elements exist such as attachment, history, memories, and the feeling of family.

Don’t get me wrong, I receive emails often of someone who had been broken up with where the relationship was a shorter one, but they were able to get their ex back.

It’s still possible, but relationships that existed for longer have a better chance based on pure numbers and probability.

It’s probably not a surprise to you for me to say that the level of commitment that the relationship had is a big factor in it being able to be salvaged or not.

For example: A marriage relationship has more “ropes of commitment.”

It’s more difficult to just brush a marriage aside than a dating relationship.

For marriage, there are more considerations and requirements to dissolve it.

Because of that there are more opportunities for someone to cool down, reflect, and re-evaluate.

There are more reasons to try to work things out than to give up, especially if there are children involved.

If the person who broke up with you didn’t see the relationship as “serious,” or that there was a potential for it to be that way, there is less for them to return to or to invest in emotionally.

So if the commitment level isn’t enough, an ex doesn’t come back as often.

Though I’m not only talking about physical attraction, that’s certainly a part of it.

Most relationships are a mixture of proportions involving each category at different levels but it’s important to do your best to be as attractive as you can in all of those areas.

Most breakups are caused by a drop in attraction.

Think about it, if attraction was still there in high levels, motivation would exist to work on whatever issues there were in order to keep the relationship intact.

I talk about that more in the video above.

No contact often revives attraction enough that it can cause an ex to re-evaluate and want to get back together or at least to consider it.

If, however, you won’t give your ex the breakup, your value drops because you are still in their life even though they have broken up with you.

At that point, unfortunately, you become something of a nuisance.

When your ex breaks up with you, you are at your least attractive point.

That’s why it’s important to stay away – because you don’t want to present your least attractive self to your ex.

You would rather your ex have memories of you when the two of you were together and their attraction to you was higher.

Since you are absent (if you are using no contact), the way the human mind works is that your ex will take time to relive moments of you two together even if they don’t want you back yet.

In that way, you are allowing the more attractive version of yourself to help you get your ex back while you are working to reclaim the attraction level that you once had by using no contact.

4. Your Response to the Breakup

You want the breakup to be easy for your ex at first so that it can be difficult for them later.

What I mean by that is that the psychology of the No Contact Rule is based on giving your ex the breakup rather than fighting it.

What happens when you do that?

The basics of it are that if you give your ex the breakup, you don’t make the breakup something they are wishing for because you are staying in their life.

That way you can get the first stage your ex will experience (the Relief Stage as explained in my article, “Stages Your Ex Goes Through During No Contact) out of the way as quickly as possible.

You want them to be disappointed after the Relief Stage instead of longing for perceived relief from your pushing them to get back together.

Again, I explain this in detail in post I link to above as well as in “The Dumper’s Experience.”

A bad response to the breakup decreases the likelihood that no contact can re-attract your ex to you enough to bring them back to you.

5. The Quality of the Relationship

What your ex remembers about the relationship is a big factor in terms of how often an ex will come back and the odds of them doing so.

Those memories can do one of two things – they can cause your ex to believe they made the right decision by breaking up with you or cause them to doubt that decision.

And they can’t reflect on those memories nearly as much if you won’t back away and leave your ex alone.

If your ex remembers a great relationship to want back, then them being concerned that they could not be able to get you back can be effective in causing them to reach out to ask for you back.

Again, be sure to watch the video above and check out the posts that I linked to in this article.