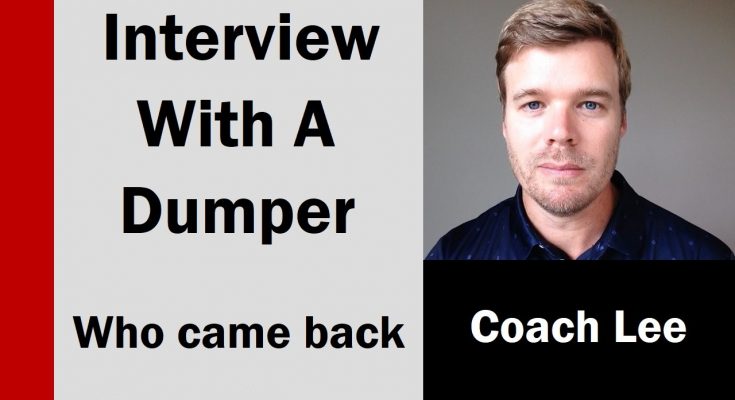 Note Before You Watch! The answers provided are REAL but they are READ.

These are NOT live interviews. It was better (and insisted on) for these two dumpers to write out their answers and then read them so that they were deliberate about what they shared and felt good about their answers after giving it some thought.

In the future, I’ll try to do some where they don’t know the questions ahead of time but there’s a lot to consider when you are delving into people’s personal lives and they were generous to do what they did.

Below is the transcript of the interview but I suggest you watch the video first to get my feedback after their answers.

Questions for a woman who broke up with her boyfriend but came back:

Question: Why did you breakup with him?

Answer: Things got routine. Looking back, that’s an immature reason to breakup with someone but my feelings just, I don’t know, faded. I didn’t know why so I just…thought it was over.

Question: What happened when you broke up with him?

Answer: He kept saying he didn’t understand. He cried. He said a lot…..I don’t even really remember it…..asked me to take him back or think about it. He kept saying he was sorry but he didn’t do anything really so that didn’t make sense. He wouldn’t let go of my hand and it was so just….awkward. I felt like I had to leave and he was saying, “Please just stay. Just five more minutes, that’s all.” But then he would ask for five more minutes so finally I just got firm and said no and that I really wished him the best. I hated to walk away with him hurting like that but I wasn’t going to stay and just, you know, not be happy or not wanting it anymore.

Question: What happened in the days after the breakup?

Answer: I thought I’d hear from him. And I was dreading it. And….I don’t know….when I didn’t I was glad. I thought that he was accepting it and at first I was relieved you know. I thought I just wanted him to leave me alone and so at first I was just kind of happy. But then it kind of seemed to set in with me. And my feelings just seemed to change. I started getting nervous and anxious. I guess I didn’t like the distance and I didn’t know what was going on. Like if there was another girl or if he was just done because I was starting to feel like I wasn’t totally sure.

Question: So obviously since you two are back together there was a point of contact. How did that happen?

Answer: Well it was painful but I let a few weeks pass. I felt crazy because I felt so sure when I broke up with him and it’s like, what is my deal? It kept getting worse and I was wanting him to text me or call me or something – just to calm me down and to feel our connection. He just felt so gone and it was really getting to me. So it was week 7 after the breakup and I got home from work one night and was just looking at my phone wishing he’d text me. So I thought I’d just type a text but not send it. Like that sounded like it would feel good. So I just said something like, “How’s your week going?”

It was just small talk. And then nothing seemed to happen. The conversation just ended. So the next day I just felt really bad anxiety about it. I don’t know what I wanted him to say. I mean, I guess I wanted him to say he wanted me back but I also knew it was my place to make amends since I was the one who dumped him. I just felt so stupid for leaving him. Like what was I thinking because I missed him so much and now I was really worried he wouldn’t take me back after what I did. So I just wrote a text asking if he would like to get a smoothie at this place we used to go to and he agreed.

I really didn’t know what to say and after some small talk all I could get out was that I was sorry and stupid and just broke down crying. He ended up holding me and we had a long talk and well, we got back together.

Interview With A Man Who Broke Up With His Girlfriend

Question: Why did you breakup with her?

Answer: We had had some arguments and I felt like she was not looking at things from my point of view. I waited a few weeks just because I was dreading hurting her but after two years I felt like she should be more or at least be better at putting herself in my shoes just like I try to put myself in hers.

Question: What happened when you broke up with her?

Answer: We had been talking about moving in together and she asked if we could look at a house. It was more for fun but I just thought if I was going to break up with her I needed to do it before we started doing that. So the next night we were supposed to go look at that house and I went to pick her up but just went inside and sat her down and said I didn’t want to date anymore. I just said, “I don’t want this anymore.” And said I was sorry. She cried and asked why and I told her. She said she didn’t mean to and would work on it. I told her that I just wanted to break up. She cried and I said I was sorry but that I thought it was best if I just left.

Question: What happened in the days after the breakup?

Answer: She sent me flowers the next day with a note saying how sorry she was and how she would change and to please give her another chance. She texted me that night to ask if I got them. I replied that I did and that I appreciated it but thought it was best to keep things this way.

She didn’t respond to that text. I didn’t hear from her and it had been like a little over a month. That’s when I kind of started, you know, missing her and what we had.

Question: So obviously since you two are back together there was a point of contact. How did that happen?

Answer: It was like missing her overwhelmed whatever problems we were having. I didn’t want to lose her to some other guy and I felt like she would make changes. I just felt like I didn’t know what was going on and didn’t want her to move on or get away now that I felt like I wanted her back, ya know? So I texted her if she wanted to meet for lunch. She said she’d think about it and let me know when she could. So the next day she said she could and when and I picked a day that worked for me. I asked how she was doing and smallish stuff and then said I had thought about it and wanted to give us another chance if she would. She said she was open to that. So we just kind of started picking things up again and about two months later we started looking at houses again. I bought one and we moved in together about 4 months ago.