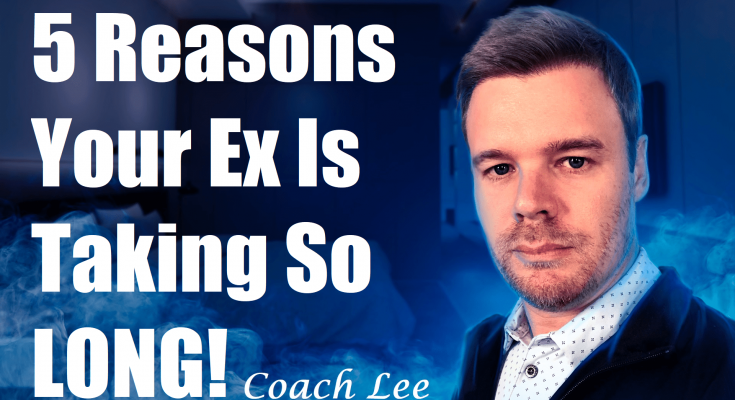 Watch my video above for 5 potential reasons why your ex is taking so long to come back to you after they broke up with you.

They are more of the common reasons that I have seen in my two decades of relationship coaching.

This is assuming that you are using the no contact rule and are wondering what is taking so long with your ex boyfriend or ex girlfriend and if things are going well or not on their side.

This post has insightful textual content that I suggest you read carefully but be sure to watch the video above all the way through so that you have a solid understanding about what is going on and what to expect in the near future in terms of your ex.

Both reading and watching the video above is how you help yourself the most.

There are several potential reasons your ex boyfriend or ex girlfriend hasn’t come back to you yet and just because they haven’t yet doesn’t mean that they won’t at all.

Here are some of the most likely reasons that your ex hasn’t come back to you yet while you are using the No Contact Rule.

1: The Breakup Was Difficult

My intention is not to get onto you and I’m not going to lecture you about how important it is to give your ex the breakup that they think they want.

You’ve probably already heard or read me discussing that.

If you begged for a long period of time or wouldn’t stop contacting your ex after the breakup, that can at least give you a clue as to why it’s taking so long for your ex to come back.

Most people react “poorly” to the initiation of a breakup.

Pushback to the breakup is not entirely a bad thing and can often be a good thing – what is bad is more the prolonged objection to the breakup and the persistent contacting of your ex.

Such a response erodes your chances of your ex coming back.

Hopefully, this only delayed a reunion.

If you stopped soon enough and went into no contact, the odds are often there for that to be the case.

The good news is that if you did react poorly to the breakup – and most people do – that going into no contact is such an extreme change that it can have an erasing type of impact of a bad response.

It also creates mystery because your ex wonders if you changed your mind and aren’t wanting him/her back anymore.

2: It Took Your Ex A Long Time To Reach The Conclusion of Breaking Up With You

Your ex, almost certainly, didn’t just wake up one day and decide he/she wanted to break up with you.

It was weeks, months, or even years of doubting, feeling attraction fade, and fighting against the ominous conclusion of ending the relationship.

Because your ex remembers going back and forth.

They remember giving it one more weekend, one more night, one more trip, and another talking to.

Since it took them a while to come to the conclusion to break up with you, your ex likely is having difficulty trusting themselves.

And if you combine this reason with the first one I mentioned (a difficult breakup), then your ex is also thinking that before they risk being wrong and having to go through another difficult breakup, that they are going to be certain before taking action to come back to you.

That does NOT mean they aren’t reflecting, considering, and hurting.

I know that it’s extremely frustrating to say the least, but it’s a likely possibility that you need to be aware of and remember.

3: Your Ex Thinks You Hate Them

Somewhere around 25-30% of exes who initiate a breakup believe that their ex partner hates them for it and would be so angry at them that they wouldn’t speak to them about getting back together.

They think you wouldn’t answer the phone or respond to a text from them.

They need that time with no contact from you – a minimum of 60 days.

Your ex needs to miss you, notice your absence, and feel the potential of losing you (see my post, Stages Your Ex Goes Through During No Contact for more insight).

It’s okay if, for a time, your ex worries you might not speak to them.

It’s a good thing if your ex has to sit with that night after night for a few weeks or a couple of months.

This is part of teaching your ex not to break up with you again in the future (it’s a lot less manipulative than it sounds).

Your ex being concerned that you hate them or won’t talk to them is also yet another reason that you should NOT ignore your ex if they reach out to you (unless you just don’t want them back).

4: Your Ex Is In A Rebound Relationship

If your ex is in a new relationship, it could simply be a rebound.

When/if your ex realizes this by seeing the shallowness of it and how forced it potentially was, it can actually be an ally of yours in terms of bringing your ex back to you.

But until your ex realizes it or the rebound relationship simply implodes because of it’s lack of depth – often brought on by the other person pushing them because of awareness that they are freshly out of a serious relationship – it’s a potential reason that your ex is taking a long time to come back to you.

You don’t want to contact them if they are in a rebound (open my post about that linked to above in a new tab for more information on that situation)!

5: Your Ex Has Friends Or Family Pressuring Them To Stay In The Breakup

Some people like to feel that they are a wise guru who is helping you from the storehouses of their wisdom.

Them receiving an ego boost from this feels pretty good and so whether or not it’s actually best for you doesn’t seem to matter as much to them sometimes.

Plus, some people who really care about your ex might think they will have less pain by sticking to the breakup instead of going back to the relationship.

Part of that reasoning is because some people think that if there is any difficulty to a relationship that it should simply be tossed aside like an empty bag of pretzels.

There is no relationship that won’t have difficulties, doubts, and days when you wonder if it’s worth it.

What you need to know is that sometimes your ex will have people in their ear telling them to stick with the breakup.

That isn’t good short term but it can certainly have the long term benefit of pushing your ex to you because your ex can start to think:

So it’s not something you necessarily want but it can still work in your favor.

So those are some of the more common reasons your ex is taking a long time to come back to you.

I talk about more details in my Emergency Breakup Kit, including how to handle requests for meet ups, what to do when you see them face to face, whether or not you should suggest it, etc.