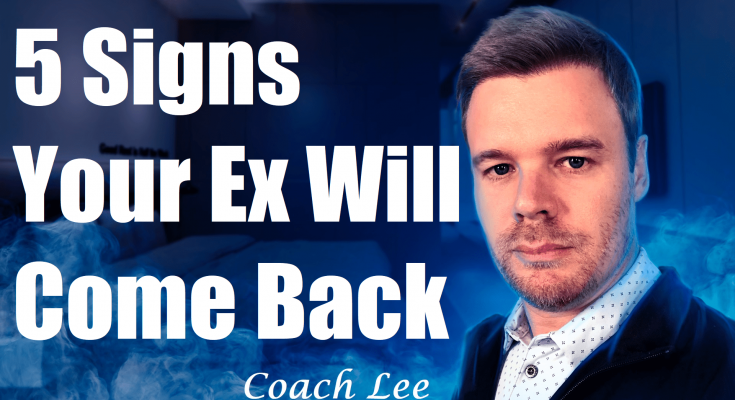 As I talk about signs that your ex will come back to you eventually after a breakup, I do so because I know that it’s human nature to look for such signs.

If you want your ex to come back, you are going to be trying to determine how likely such an event is.

So here are some signs that your ex will likely come back eventually.

Note: In the video above I also give several “rapid fire” signs that I share without much explanation, so if these five aren’t enough, watch the video above to get more.

I highly recommend you watch the video above as I explain each of these signs in more detail and as I list several “rapid fire,” signs near the end.

This sign is a crucial component in the journey that your ex takes to eventually come back to you.

It’s one thing for someone else to see it within us, but it’s far more profound for us to see it inside of ourselves.

It’s a form of enlightenment for your ex because they witness themselves being at a point to where they seek you.

Your ex realizes that they reached a point to where they felt they must reach out to you.

This is extremely important and it should tell you that your ex is at least reflecting and reconsidering the breakup to some degree.

Even if your ex contacts you about a small or seemingly trivial matter, it’s still an important sign that he/she takes the step of contacting you.

This sign is powerful and shows that your ex has been doing some thinking and soul searching.

This soul searching has led them to find you and to memories of the two of you together that are meaningful to your ex.

What is behind this is your ex missing intimacy with you.

By intimacy, I mean words, experiences, and moments where the two of you were naked in front of each other.

Not just naked physically (though that is certainly a type and a contributor to intimacy), but emotionally and intellectually.

You didn’t hide. The other person saw into you (in to me see).

Your ex remembers times when the two of you felt your love for each other connect, harmonize, and deepen.

This shows that all is certainly not lost and that your ex is likely to eventually come back to you.

When your ex shows jealousy, it’s one of the first signs of how your ex will handle losing you.

Remember, as I mention in a lot of my videos, your ex feels loss at a later time than you do.

When your ex breaks up with you, they feel control.

Your ex feels that they could get you back if they wanted you back since they were the one to dismiss you.

There is a gut-level assumption that you will eternally be in the position of wanting the relationship.

In that way, your ex doesn’t experience a real breakup until they feel that you have been lost or that there is a true risk of losing you.

Jealousy shows that your ex isn’t happy with losing you to someone else.

It shows that the breakup was a concept that seemed like what they wanted until they actually experienced it and its consequences.

If your ex is showing jealously, it’s a good sign that your ex will come back to you at some point.

It doesn’t mean that you should call up your ex and tell them that you see their jealousy and figure that it’s time for the two of you to get back together.

You should still let your ex come to you at their own pace or else you risk pushing them away again.

But it is certainly a good sign that reuniting with your ex is not just a possibility but a probability.

Sign 4: They Ask About Your Future Plans and Expectations

This is another indicator that your ex is missing you and missing intimacy with you.

Your ex is feeling that they aren’t a part of your life anymore and in some ways are wanting to know what they are missing and if they are still a part of it in a way.

Asking about your plans for the future can also be a covert, secretive way of trying to determine if you are going to stay in the same area and if the future that you plan would be conducive to the two of you getting back together.

What’s more, it’s your ex boyfriend or ex girlfriend seeking to “see into you,” which demonstrates that desire for intimacy – that I often mention – in a big way.

If your ex is asking about your future, it’s a very good sign that your ex will come back eventually.

Sign 5: You Bump Into Your Ex A Little Too Often To Be Coincidence

Bumping into someone isn’t out of the ordinary or necessarily something to be suspicious about, but if it is your ex and it happens at places where your ex knows you will be at certain times, it might be more than coincidence.

Though this isn’t something that you should mention to your ex or call them out on, it is something that could bring you encouragement if you want to reunite with them.

Twice is more difficult to explain as mere chance or coincidence.

It’s quite possible that your ex wants to see you (as I discuss in the video above) and wants to get an idea of how receptive you might be or to see if you are angry at them.

When and if you see your ex, be polite and friendly, but casual.

Don’t bring up the relationship unless your ex does and be brief as much as it is up to you.

You could say something like, “It’s good to see you, but I need to get going.”

Remember, I mention several bonus signs in the video above that can give you a better idea, but if you are seeing signs that your ex is going to come back, take encouragement from that but continue to let your ex come to you and it’s usually best to avoid initiating contact with him/her.