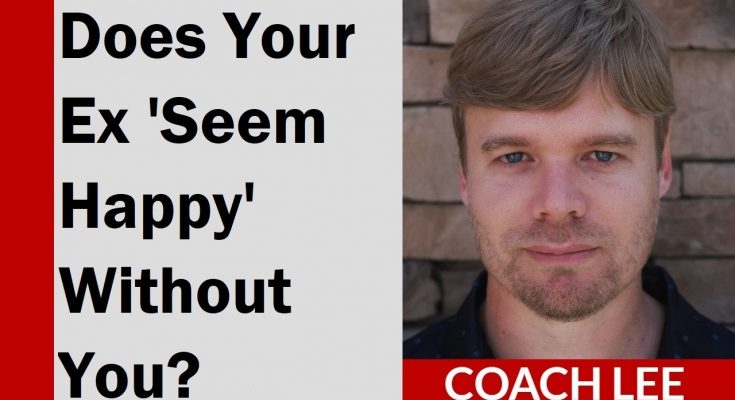 In this video Coach Lee discusses what’s likely going on if your ex “seems happy” after the breakup or if your friends have said that they “look happy.”

Be sure to watch this important video all the way through.

Often times, after a breakup, the one who was dumped looks for signs that their ex might want them back (or not).

The hope that an ex still harbors feelings for you can send your spirit soaring.

You regain your appetite.

Sometimes you sleep worse because you are excited!

But if you interpret the signs to suggest that your ex does not want you back, the opposite likely happens.

Loss of appetite, you can’t sleep because of anxiety, and the emotional pain seems horrific.

Sometimes a friend, in an effort to help you, will give you updates on your ex.

These are based on their perceptions.

In the video above, I mention an experience from high school where a close friend had been dumped by her boyfriend.

She had been sad and possibly even clinically depressed for weeks.

I had convinced her to go out with a buddy and me for a “just-friends” night of a movie and hanging out.

It seems like I remember that we had planned to go bowling.

Anyway, the three of us were talking and the buddy of mine said to her that he had seen her ex and that he “looked happy.”

He went on to say that the ex seemed to be over her and “moving on.”

To this day, I still remember the look of hurt in her eyes.

She said she had to get to class and walked away.

I wondered to myself when he had actually even seen her ex, because that guy went to another school and they weren’t really friends.

He responded with, “I haven’t, I just want her to get over this and have fun with us this weekend. She needs to get over him.”

He looked into her eyes and lied.

Did he have good intentions?

Maybe, but it also could have been completely that he didn’t want to see her sad and didn’t want her to ruin his weekend.

Which means he lied from purely selfish motivations.

Some people in his situation might have good intentions in telling someone that their ex “looked happy,” or seems to have “moved on.”

But what if they are just making something up?

Even if they aren’t making it up, how can they really know?

Was it because your ex smiled?

Did your ex laugh?

Does that mean that they are “happy” and over you?

Does that mean that they are living in joy now that you two aren’t a couple anymore?

How could anyone possibly know that for sure?

How can anyone know what someone else feels or might feel in the future?

Even if your ex was happy in that moment, your ex goes through stages after breaking up with you if you are using the no contact rule (or the Intelligent Contact Rule).

The first stage (or sometimes the second) is Relief, which can look a lot like happiness or “moving on.”

But if you stay in no contact, that stage usually isn’t eternal.

Of course, I’m assuming you two had a good relationship of some decent amount of time and what you would call a “connection.”

If that’s the case, your ex usually experiences relief at first from getting the breakup over with.

It’s not like your ex wanted to hurt you.

It’s not like your ex woke up one day and decided to break up with you.

It was planned due to weeks, months, or even years of your ex struggling with it.

They likely went back and forth in their mind.

They likely talked themselves out of it more than once.

But finally, feeling that they had to because emotional attraction had fallen to the point that they didn’t see a future with you anymore, they went through with it.

So the first or second stage after that is usually relief that the breakup event is over.

They got over that hump.

Be sure to watch the video above all the way through because there’s more for me to tell you.