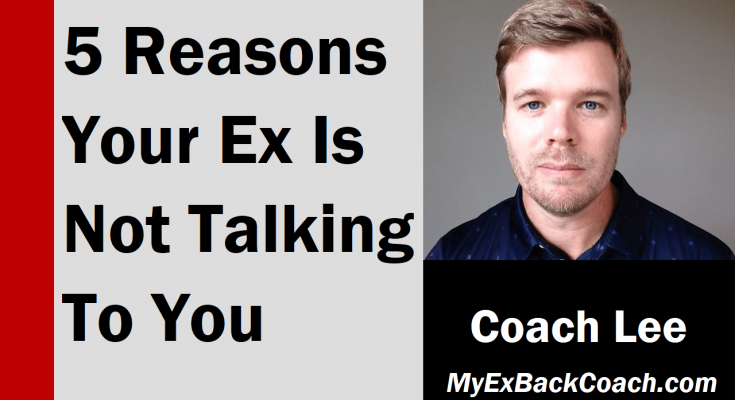 In the video above, Coach Lee answers the question, “Why isn’t my ex talking to me?”

If your ex is ignoring you, not responding to your texts, not answering your phone calls, and not reaching out, this video will help you understand why this is happening and what you can do about it.

Be sure to watch the video above all the way through!

If your ex isn’t talking to you, it doesn’t mean that you can’t get back together with him or her.

Coach Lee will explain what you can do to re-attract your ex boyfriend or ex girlfriend even if they aren’t talking to you and seem to be ignoring you.

After the video, read the article below:

Why Won’t Your Ex Talk To You?

It makes no sense that someone who said they loved you and that they wanted to be with you now says they don’t and doesn’t want to talk or communicate with you.

Maybe you’ve tried and you have been ignored or your ex responded with anger.

This video is helpful if you are wondering if your ex ever had feelings for you at all and I’m certainly going to be covering that here as well.

It might be the most immature reason for not talking to you.

Your ex, if this is the reason, doesn’t want the awkwardness or weirdness of interacting with you.

Your ex doesn’t want the confrontation and the uncomfortableness.

Your ex would rather just not deal with it and even to pretend that you don’t feel anything.

If your ex doesn’t have to see you or hear from you, he/she can pretend that it’s not impacting you, you are just fine, and they don’t have to think about you being in pain.

Your ex would like to fantasize that both of you can just walk away from this unscathed and no one is going to hurt.

Like I said, it is the most immature and selfish response.

It could be that you see this and determine that it’s best if you two don’t get back together after all.

Don’t worry, it’s fine if you don’t feel that way.

I’m not saying that you should just give up.

What I do suggest is that you use the No Contact Rule.

That’s when you respond to the breakup with maturity, dignity, and strength.

This is different from number one.

Reason one is that your ex totally wants to avoid the situation and pretend, almost, that you don’t exist anymore.

Out of site, out of mind – they don’t have to see you hurt anymore or at all.

Reason number two, however, is that they feel guilty because they know you are hurting.

Guilt means that it is bothering them and that they are thinking about it whereas in the first reason your ex is reframing their mind, distracting themselves, and doing mental gymnastics to avoid thinking about your pain at all.

If your ex feels guilt, they are thinking about it and it’s bothering them.

They don’t like that they’ve hurt you and they don’t know what to do.

You might say, “Well it’s easy, they should just take me back.”

To be honest, however, at the moment, they don’t want to.

Take a look at my video, “Stages Your Ex Goes Through After Breaking Up With You.”

It’s about what your ex goes through after breaking up with you if you use the No Contact Rule (I linked to my post about that above).

At first your ex feels relieved.

I know that’s not comfortable for you to hear but your ex NEEDS to go through that stage.

It’s actually the most important stage for them to go through and they go through it faster if you leave them alone.

Why is it the most important stage?

Because if you want your ex back as quickly as possible, you want them to get past relief and into the stages that cause them to experience the negative consequences of the breakup.

The reason for that is because your ex doesn’t have a reason to undo the breakup unless the breakup is causing negatives for him/her.

So leave them alone and let them get beyond that stage.

You should leave them alone longer, but it is even more crucial during this stage.

If you are communicating with your ex during the Relief Stage, they don’t get to the second stage where they look back and wonder if you aren’t going to chase, if you are still interested, and if they made the right decision.

After all, the breakup didn’t happen over night.

It likely started many weeks, months, or even years ago where your ex went back and forth on what they wanted, where their feelings changed, where things improved and then got worse, etc.

For a while, your ex tried to figure out what they wanted and what the future held.

Your ex probably fought back and stuck in the relationship even when they weren’t sure.

It’s possible they didn’t even mention it to you.

Finally, they felt like they had made a decision and so they broke up with you.

Then they went into relief.

The feelings of guilt cause your ex to stay in relief longer.

That might sound like the opposite of what you would expect because guilt is a negative feeling.

But it actually prevents them from experiencing some relief in order to go into further stages.

On a side note, guilt can be a positive after your ex is over some of the initial stages.

The reason for that is because it shows that they care about you and realize they have hurt someone for whom they are having returning feelings of love.

And again, giving them the experience of the breakup is the way to get them into the stages where coming back to you is a strong liklihood.

You have to be away from them and leave them alone for that to happen.

I talk more about guilt in the video above – especially about why you shouldn’t use it as a tactic or strategy to get your ex back.

Reason #3: Your Ex Is Angry At You And That’s Why They Aren’t Talking To You

Maybe you have cheated.

Maybe you talked to someone about your ex behind their back.

In that situation, if you haven’t already, your role is to reach out, apologize sincerely, promise it won’t happen again, and ask them to take you back.

Reason #4: Your Ex Doesn’t Trust Themselves To Communicate Or Interact With You

That could mean that your ex wants to get back together with you or at least a large part of them does.

Some people, however, are very good at looking into the future and making a decision about what’s best for themselves – even if they’re wrong.

A lot of times, they’re not even right about it and they just do it for silly reasons.

They’ll think they it will hurt right now but that this is “best for me.”

But, in this case, your ex is still attracted to you and has feelings of wanting to be with you so they don’t trust themselves to be around you because they feel vulnerable to giving in.

Your ex fears that you could talk them into getting back together with you.

The temptation might be for you to try to force the two of you being around each other so that you can talk them into it.

BUT, if you have already made it clear that you don’t want the breakup and that you disagree with it, you’ve done all that you can do for a while and maybe ever.

More of expressing that message can likely only hurt your chances of getting back together with your ex.

Surprisingly, staying away is the most effective way.

I discuss this quite a bit more in the video above (but you already know that because you’ve watched it, right?).

So scroll up and watch the video all the way through.

It’s powerful re-enforcement if you already have read this content and I also discuss some important things not in this article/post.

I hope you will rely on my two decades of experience instead of your initial reactions and thoughts which my experience has shown is too often misleading.