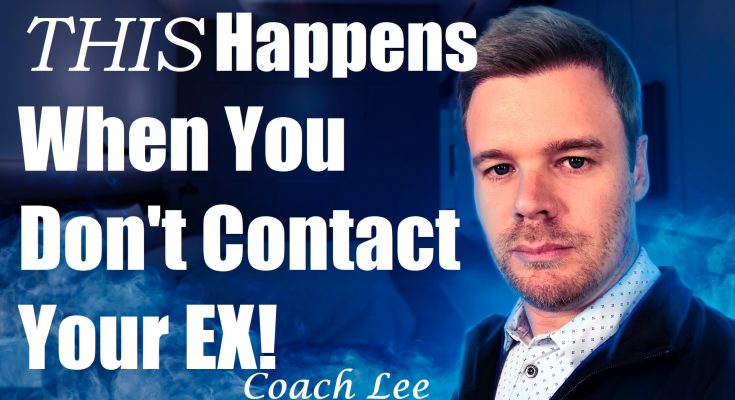 Below is an automatic transcript of this video. An edited, final transcript and article will be available soon.

This is Coach Lee and I’m going to explain what happens when you don’t contact your ex.

If you’re wondering about what goes on with your ex when you don’t contact them, it’s probably because you are considering using the no contact rule.

Your ex has broken up with you and now you wonder if the no contact rule will help you get them back.

I bet you are wondering how it impacts them and I have other videos that talk about this in other ways. This is one where I will talk about it in a way I haven’t before.

I’m going to tell you five things that happen when you don’t contact your ex and this is generally speaking. No contact doesn’t work in every single situation even though I wish that it did, but it works a lot and when it does, this is what happens:

1. You stop or prevent a fight

And why that’s important is because, if there is a fight about this and a lot of people fight about the breakup by demanding to know why the other person won’t work on it, why they won’t take them back, why they are doing this, etc., it turns into one side versus the other.

So instead of you having any semblance of being on the same side of the table, it is opposing forces and your ex becomes the defender of themselves.

They are defending themselves against you and so it puts them on the opposite side of the table and they become a good warrior against you.

If they are used to fighting you on this or anything, but especially in this moment, then it’s difficult for them to have feelings of warmth and it’s difficult for them to go to the other side because a lot of times people will fight even if they don’t believe the things they’re fighting for. They’re just so used to fighting against something else and a lot of times they don’t really know why except that they have always fought it and that can actually happen with your ex.

So whereas, after the breakup, I tell people they should tell them, “I don’t agree with this. I think we’re great together and I don’t want to be broken up with,” but you also have to have the ability to realize you don’t always get what you want and that they want something different right now.

You’re not going to get what you want by making them go against their own heart and in the moment they think they don’t want to be with you.

Accept that that could change but that right now (at least) that’s what’s going on. If you fight them when they feel this way, it makes it seem as if this is their reality and you are trying to make them go against their own heart.

That will make it very difficult for you to get any traction on that and they will grow to resent you and will fight against you.

They will also likely be defensive constantly and you won’t make progress but, instead, you will severely delay the window that opens when you could get them back.

By not contacting them, however, you show them you’re not fighting them on this and that you’re letting them make their own decisionn and to do what they think is best for themselves – which is what you have to do in life when you’re dealing with an adult.

Children need help with their decisions and sometimes, if they make the wrong ones, an adult who cares about them and knows better needs to help them make the right one – even if it means making that for them – but with another adult in the situation, you cannot make their decision for them and it is a terrific sign of maturity if you accept their decision and they will see that.

2. You prevent their desire for escape

Because if you are just contacting them, sending them letters and won’t let them get the breakup they think they want, then they will see this escape from you and from the relationship as some beautiful thing in the distance they can’t get to. And why can’t they get to it? It’s because of you.

You don’t want them seeing you as what’s keeping them from “escaping.”

When you fight them, when they feel like they can’t pull away from you, they will feel likethey are trying to escape. And what is it that you want to escape? A trap. It’s a cage. So don’t let it feel like you are a cage keeping them from escaping because that will only make them try to escape even more!

It will make them have energy and fight inside of them to run further away from you emotionally and to feel like you are the one keeping them from happiness and you don’t want them to feel that at all.

As a matter of fact you want them to wonder if happiness was with you. You want to give them the opportunity to look back at the days and times, the experiences, and the moments you had together and for them to wonder to themselves, “Was that actually happiness? Did I just give away happiness? Can I get it back?

But if you make it to where they’re fighting so much trying to get to this other place, even if they haven’t thought of it necessarily that way before or it hasn’t had such a colossal status attached to it, the more they fight to escape and the more that the concept of escape seems to be wonderful and where fulfillment for them is.

So if you don’t give them the breakup, you actually build it up as an escape from you.